The largest driver behind currency movements this past week was the Federal Reserve. Perhaps unsurprisingly, the market rewarded the Federal Reserve’s inkling that inflation and the end of quantitative easing are on the table with a strengthening dollar. The strengthening dollar coincided with poorly performing equities and increasing yields on interest bearing assets, with the 10 year up about 40 basis points on Friday.

In looking forward to the coming week, a number of influential indicators are on the docket, each of which could move exchange rates by large amounts. The upcoming indicators include new home sales from the U.S. (better than expected would likely provide support to a stronger dollar); durable goods orders in the U.S (again, higher than expected could provide support to dollar appreciation, whereas weakness compared to the European Union could have the opposite effect); U.S., Eurozone, Germany, and France business and consumer confidence; GDP growth rates for the U.S., France, Germany, and the United Kingdom; and a number of influential macroeconomic indicators from Japan and South Korea. The GDP figures will likely be the largest mover. 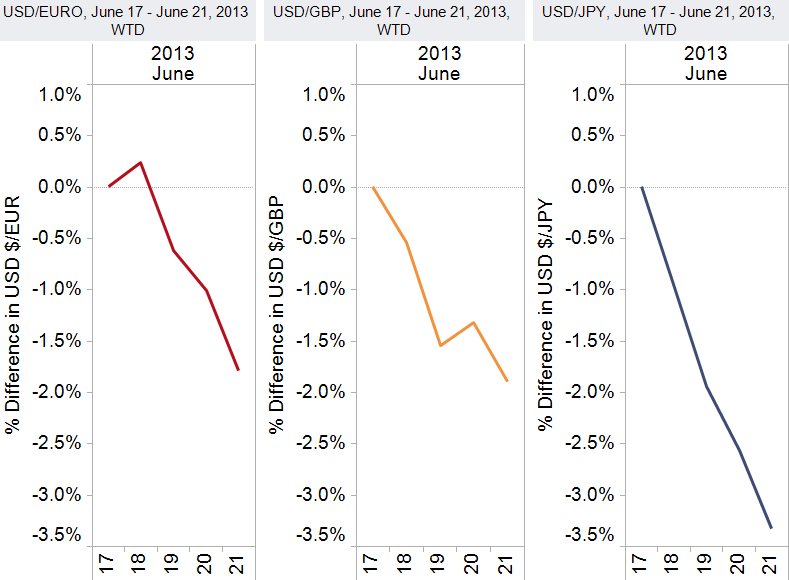 USD vs EUR, GBP and JPY, Week to Date

The dollar strengthened last week and is generally stronger against most major currencies so far this year.

With some very influential European economic data on tap in the coming week, the Euro has heightened risk of depreciation should data come in too far below expectations, whereas any indications of strength could come at the expense of dollar owners. On a five-year basis, the Euro is only down about 5%, indicating that other factors beyond economic growth are influencing the relative strength in the Euro.

With U.K. credit conditions and final UK GDP figures likely to play second fiddle to the U.S. and European data in the coming week, movement towards or against the pound is likely to be external, with the exception of whether the UK Financial Stability Report will have any affect.

Based upon the historical role the Yen has played as a safe currency, one would have expected the Yen to have been strong this past week given the lackluster economic data. Surprisingly, the Yen weakened against most of its major trading partners, largely because of concern over how safe the Yen is now.

With that said, the anticipated range for the coming week is 96 to 100 USD/JPY, representing an even spread. Should economic data coming in poor on a worldwide basis, the Yen will likely gain strength, whereas better than expected data will likely push the Yen lower. 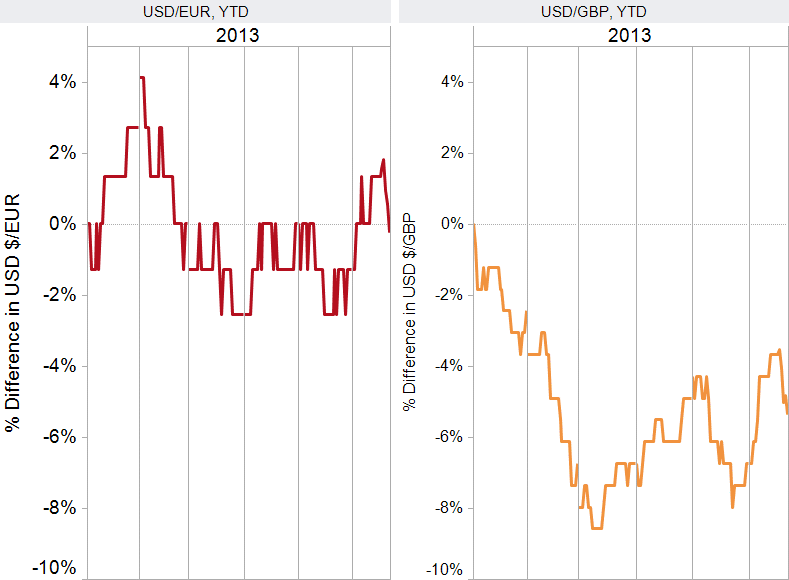 USD vs. EUR and GBP, Year to Date 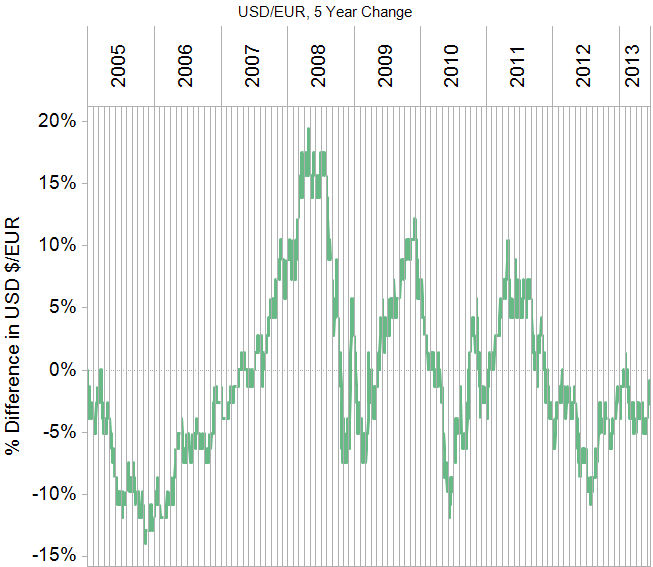 This information is intended to assist investors. The information does not constitute investment advice or an offer to invest or to provide investment services and is subject to correction, completion and amendment without notice.