The political stalemate in the United States over how to deal with unpopular health care socialization and unsustainable expenditure levels was the topic of discussion among foreign exchange investors this past week. The U.S. federal government is now entering its third week of shutdown. Investors continue to wonder how the shutdown might affect worldwide economic growth.

In addition to the two issues that led to the federal shutdown, the U.S. Treasury Department has also warned that it needs Congress to increase the debt limit beyond its current level if the federal government is to avoid delaying expenditures to various entities and/or a potential default in payment of interest on U.S. treasuries.

The latter issue – default – has dominated foreign exchange message boards, with the discussion largely focusing on whether the U.S. Treasury would delay payment on other types of expenditures to ensure that interest on U.S. debt or whether the Obama Administration would do something that has not happened in the history of U.S. – default.

The strength of the European economies and fiscal policy in the United States are likely to be the market movers this week. Overall, with weak economic news out of the United States, Europe will likely gain even more attention as investors attempt to ascertain how much of an effect the U.S. federal shutdown and potential default might have on the world economy. Investors will also be looking at whether European economies can continue to gain momentum from self- induced demand given potentially slowing economies in the U.S. and China.

Overall, Dollar investors are likely to be a bit jittery given the political situation in the United States right now. With the current U.S. federal shutdown as the baseline case, analysts give the dollar a good deal of downside bias this week of between one and two percent against the dollar’s major trading partners.

The short-term condition of the Dollar is also masking a long-term movement away from the Dollar should the entities responsible for the Dollar – the Federal Reserve and the U.S. Treasury — continue to implement monetary and expenditure policies that are not connected with anything beyond simple financial manipulation. 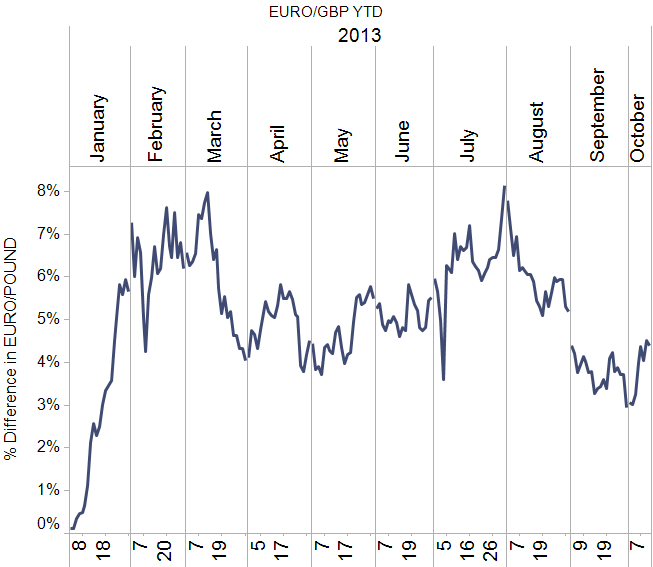 ARE WE SEEING THE BEGINNING OF THE END FOR THE DOLLAR AS THE WORLD’S RESERVE CURRENCY?

Op-ed Chinese writer Liu Chang, of the official Chinese press agency Xinhua, recently argued that it is time to replace the Dollar as the world’s reserve currency. The argument is nothing new, at least out of China. What was surprising is that Liu specifically addressed the current U.S. fiscal stalemate as further evidence that world needs a new reserve currency. In Chang’s own words, the world should consider a new reserve currency „that is to be created to replace the dominant U.S. Dollar, so that the international community could permanently stay away from the spillover of the intensifying domestic political turmoil in the United States.“

What currency or financial instrument could possibly replace the Dollar as the world’s reserve currency?

Some have pointed to the more stable Euro, with its already wide usage (second only to the Dollar) and commitment to exchange rate stability as the best alternative. The Euro, of course, would have its own set of problems as the world’s reserve currency, including worse structural budget problems than the U.S. (in general) and slower long-term economic growth.

Others have pointed to IMF special drawing rights as the best alternative to U.S. currency domination. Using IMF special drawing rights as the solution has, of course, its own problems as well, including less national sovereignty and no current usage beyond large international financial institutions and governments (if implemented the way some would like it implemented).

Another viable option is gold. Some speculate that China’s thirst for the precious metal is driven by its desire to have gold be the world’s next reserve unit of account. Gold has the benefit of being out of control of any one government, and comes with less inflation.

Overall, one thing is certain in all these reserve currency discussions. The Dollar is under pressure for replacement, and unless the U.S. does something to counter the international pressure, the Dollar will likely go the way of the 19th and early 20th century Pound, the mid-17th century Franc, or any of the other past world reserve currencies.

This information is intended to assist investors. The information does not constitute investment advice or an offer to invest or to provide investment services and is subject to correction, completion and amendment without notice.[/box]